Norah Jones’s rendition of the Gene Scheer song “American Anthem” hits all the right notes and it frames my thoughts about this Memorial Day. 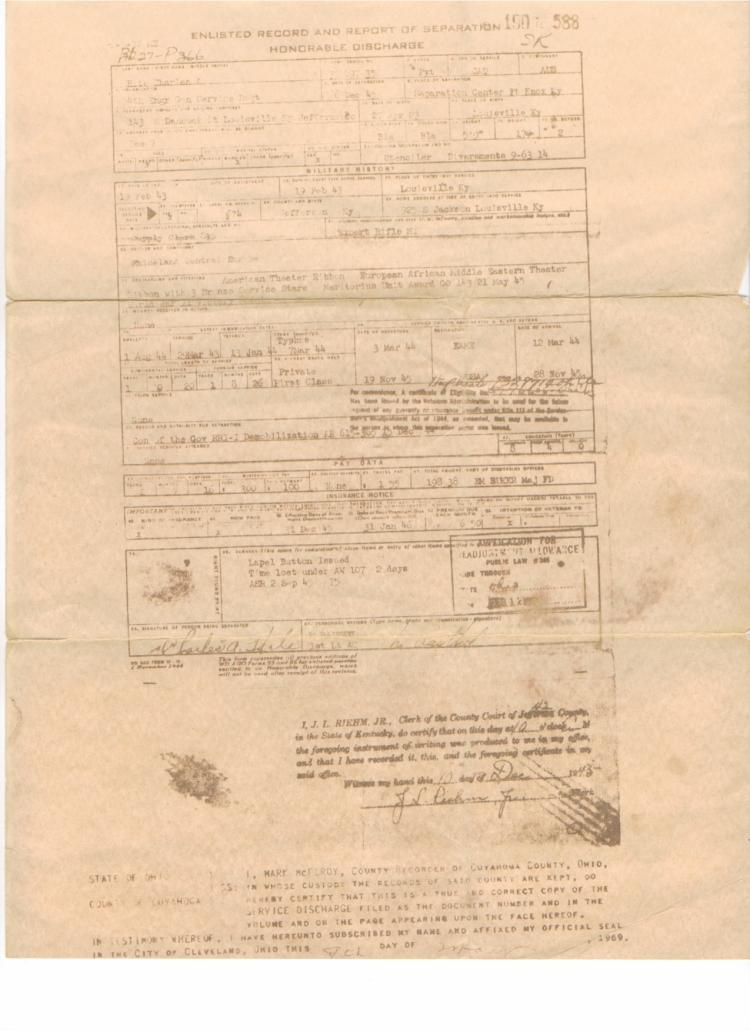 My grandfather, Charles Albert Hite, served in World War II and by all accounts he was none too happy about it. My Uncle Eric wrote about my grandfather’s views on serving in some of our correspondence. According to Uncle E’s memory, my grandfather “listened to FDR’s speech promising all them mamas that their boys would be safe from the draft, but if I can remember correctly,” notes my uncle, “he and Uncle Frank received their draft notices the next week.” What isn’t apparent from the Honorable Discharge report itself and my grandfather’s frustration with FDR involved his enlistment date on February 19, 1943: my grandparents were married only six days before he was drafted on February 13, 1943.

The Honorable Discharge report shows that my grandfather mastered the rifle, but according to my Uncle E, my grandfather had no interest in using his skills. “I can remember the Ole Man being angry at the Blacks back home who constantly went to the press about wanting the Blacks to have a bigger participation in the War effort,” he writes. According to my uncle, my grandfather “didn’t like that shit at all.” In fact, my uncle continues, “he was real cool with ‘digging ditches,’ and didn’t want nothing to do with the fighting.”

Today, as it is Memorial Day, I think about my grandfather’s service now through the lyrics of Jones’s resonant voice–even though those lyrics don’t quite fit his story. When I think of my grandfather, I wonder how he must have processed going into war with a new wife and and a baby on the way. I wonder how flimsy hope must have felt to him as he thought about making it back to them. My grandfather was fortunate since he did return to his wife and son. Today, I’m wondering about the soldiers he met who didn’t make it back. Did they have young wives and children who inspired their dreams of making it through the war? For my grandfather, Norah Jones’s bluesy, plaintive voice doesn’t quite strike at the core of what he might have been feeling–Louis Armstrong’s (What Did I Do to Be So) Black and Blue best captures the frustrations of a Black man from the Jim Crow South sent off to fight for a country that did not even protect him from Kentucky. When I imagine the friends that he might have lost, though, Norah Jones’s tender, raspy voice moves in deeply when I think of their mothers. I think of the soldiers telling what they might have believed but when Jones sings “America, America, I gave my best to you,” I imagine their mothers singing that part and I am deeply moved.

I know a lot of folk who celebrate Memorial Day with barbecues and picnics on Sunday. When I look around my neighborhood, there aren’t too many folks partying today, which seems appropriate. Today should really be a day for thinking about those mothers who gave us their “very best.”