As cute and adorable as you are, cuddly in a way that Kadir Nelson expertly captures in nearly every image he draws, your beauty and our love for you will not save you. You may not understand this now, but you should know the truth. This truth comes from writer James Baldwin as he expressed it to the nephew he so dearly loved. So here it is: “You were born into a society which spelled out with brutal clarity, and in as many ways as possible, that you were a worthless human being.” The Fire Next Time, 1963 to November 24, 2014.

As Baldwin tells his nephew, the biggest mistake you can make in this life is to believe what a white supremacist society says about you…love yourself despite everything and everyone telling you not to. With Love, EMM 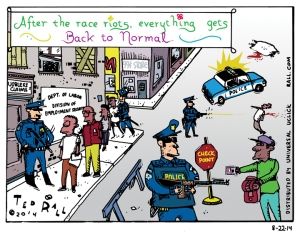 In the United States, black people are the only ones who commit evil acts of violence. Killing workers at an abortion clinic, shooting children at an elementary school, a movie theater, or a parking lot, and dropping “precision” guided drones that rip apart unarmed children in the Middle East is apparently much better violence. Rejecting policies that would help feed the nation’s children, rejecting children seeking escape from certain death, the ambition to deny universal healthcare also counts as better violence.

Everyone with a microphone is telling black people not to commit violence as if black people are being indicted for shooting unarmed black boys. As M. E. Dyson made clear, “black people who kill black people go to jail.” Apparently, those bound to “protect and serve” can kill black people with impunity…oh yeah, we’ve made great progress since the days of “Bull” Connor…it’s mourning, as usual, in America.

6 thoughts on “No Indictment, No Surprise”