Last week, I wrote a post about the National Center for Civil and Human Rights and offered a few reasons why I’ve waited to go. Today, I have a new reason that pushes back my visit even later. Yesterday (Sunday) was the last church service to be held at Friendship Baptist, Atlanta’s oldest baptist church, founded by the formerly enslaved 152 years ago. Sometime this week, the historic church will be demolished in order to make room for a new football stadium. How is this city actually honoring civil and human rights by erecting a museum and demolishing an actual edifice demonstrating what the Center can only emulate?

Temporarily, Friendship will be moved to Morehouse College where services will be held in the Ray Charles Auditorium. The move to Morehouse pays homage to its history of being founded in Friendship’s basement; followed by Spelman College two years later. I’m not sure how you “replace” the original work of people who built their own sanctuary and consider the new construction the return of the past craftsmanship and social justice work of the original.

The New York Times ran a story about Friendship’s end that included Kevin Liles beautiful photograph of Sula Burr who, according to the caption, “arrived early for the final service of Friendship Baptist Church.” 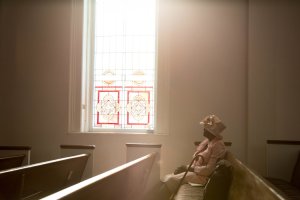 I wish Ms. Burr had been interviewed, and yet I respect that she was granted space to reflect, remember, and perhaps grieve. This photograph gives me a greater appreciation for preservation. New shiny things are not always better than old things. I’m sure the National Center for Civil and Human Rights will place a stained glass window, a brick, an organ pipe on display to commemorate the original Friendship Baptist Church. When I visit, I’ll know Friendship’s relics will be the Center’s lie, the City’s lie, and Falcon’s owner Arthur Blank’s lie because if they truly honored the site and its history, they would have left that church alone.

The decision by the Times to place Mike Tierney’s article about the end of Friendship Baptist in the Pro Football section is a thoughtful one. The article’s placement answers Martin Luther King, Jr.’s the questions he lays out in “Letter from Birmingham Jail:”

On sweltering summer days and crisp autumn mornings I have looked at the South’s beautiful churches with their lofty spires pointing heavenward. I have beheld the impressive outlines of her massive religious education buildings. Over and over I have found myself asking: “What kind of people worship here? Who is their God? Where were their voices when the lips of Governor Barnett dripped with words of interposition and nullification? Where were they when Governor Wallace gave a clarion call for defiance and hatred? Where were their voices of support when bruised and weary Negro men and women decided to rise from the dark dungeons of complacency to the bright hills of creative protest?”

Well, Dr. King, I think they were thinking about football; praying for their teams to win; raising their voices in support of their teams. The South, it seems, worships football as its God. The razing of Friendship Baptist Church for the construction of a new  football stadium confirms that this southern city has a very supportive fan base who value football as its God.