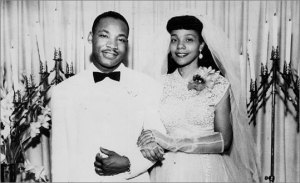 In much of the scholarship one reads about the tragically brief life of Martin Luther King, Jr., one can observe the great efforts scholars make to engage King’s struggles to resolve the tension between a ministry centering on his role in advocating and living a life consistent with the gospels and the private man who was habitually unfaithful to his wife Coretta. The numerous male scholars writing about King overlook the possibility of considering King’s chronic infidelity through his promulgation of nonviolence; instead, they read the fact of his chronic infidelity solely through the lens of King’s religious vocation and the pressures, tensions, and anxieties related to the stress of his besieged life as a public figure. For example, in I May Not Get There With You: The True Martin Luther King, Jr., Michael Dyson asserts this:

“In King’s case, the varied functions of black privacy were even more highly charged. During much of his career, King’s private time was spent where he and his colleagues shaped strategies for social change. King’s time at home was severely curtailed by the inhuman demands of the movement. He spent nearly twenty-seven days of most months in pursuit of the prize of black liberation. Inevitably, this separation weakened King’s sexual bonds with his wife and eroded the quality of time and affection he could devote to her and to their children. To be fair, King’s habits of sexual adventure had been well established by the time he was married. His personal and public circumstances only amplified his sexual indiscretions” (161).

Dyson follows his analysis of King’s serial infidelity to a very thoughtful reading of patriarchy and King’s full embrace of it. No one disputes that King was a male chauvinist who believed that women were not equal to men and thus unqualified to lead. Married women, like Mrs. King, were expected to raise children and keep house.

Others offer similar readings of King’s habitual infidelity. In Jonathan Rieder’s book, The Word of the Lord is Upon Me: The Righteous Performance of Dr. Martin Luther King, Jr., he recounts a brief conversation that nearly matches the connection Dyson makes between the activism that pulled King away from his family as well as a response to stress. Rieder writes:

“A friend once raised ‘the subject of [King’s] compulsive sexual athleticism…after being prompted by a worried mutual acquaintance. ‘I’m away from home twenty-five to twenty-seven days a month,’ King Answered. ‘Fucking’s a form of anxiety reduction.'” (78)

Rieder’s portrait of King follows his interest in the various rhetorical situations and communities that King addressed, held membership in, and engaged personally. Thus, the ribald language King ostensibly put forward in this exchange reflects his position in a close-knit community that recognized his humanity, respected the fact of his private life and private needs, and accepted him–faults and all.

I can go on and on with the examples of scholars writing about King’s private sexual escapades in relationship to patriarchy, male chauvinism, and the anxieties of being a besieged man, but so far, I haven’t read where any of these very interesting and thoughtful King scholars have associated King’s adultery with his fierce commitment to nonviolence as not just a tool but a philosophy. To that end, while activists marvel at King’s keen understanding of the relationship between adequate wages and human dignity as well as the significance of living with integrity, there is an arresting silence about the limits of King’s vision as it pertains to the relationship between adultery and violence. Perhaps those who discuss the matter assume that in describing patriarchy, they’ve said all that needs to be said about violence, but if that’s the case, there needs to be more interrogation of the limits of nonviolence as a life philosophy when it accepts the violence of adultery. In describing adultery as violence, I aim to place it within the scope of King’s vision and commitment to human dignity and integrity. While King’s infidelity was not made public knowledge until his best bud, Ralph Abernathy exposed it in his autobiography, And the Walls Came Tumbling Down, it was a very open secret to those in the movement–and of course the U.S. Government. So what is intriguing to me is how often these oral narratives offered by King’s friends convey an awareness of King’s infidelity, and not a single Christian one of them ever seems offended that King’s actions could have shamed, embarrassed, and diminished his wife’s efforts to live with dignity and integrity.

I recently finished reading Ben Kamin’s book, Room 306: The National Story of the Lorraine Motel, and despite its great reviews, I found it underwhelming. The interviews are very short and the conversations lack, what I consider to be, rich engagement. One of the more egregious instances of such an occurrence is featured in chapter three, which Kamin titles, “Lover at the Lorraine: Georgia Davis Powers.” Most King scholars cite Powers as one of the three mistresses he had genuinely strong feelings for. In citing her presence at the Lorraine Motel on April 3, when he gives his famous “Mountaintop” speech, and on April 4 when James Earl Ray kills King, there is no further attempt to bear greater scrutiny regarding her witness. Understanding Powers as a party to the violence of King’s infidelity challenges the consistency of Kamin’s presumption that “witness” merely refers to the lethal violence of King’s assassination and not the routine, everyday violence committed against Mrs. King and their children. Failing to recognize the leniency granted King’s routine infidelity implicates many “witnesses” to the persistent aggression King’s entire circle maintained against Mrs. King. The documentary short, “The Witness: From the Balcony of Room 306,” offers an example of what appears to be the easy embrace of such aggression.

The film centers on the witness of Reverend Samuel “Billy” Kyles who was the only person who actually stood beside King when he was hit by the lethal bullet. Kyles and his wife were hosting King and his guests for dinner at their home. While dinner was scheduled for six, Kyles told King the meal would be served at 5 because he knew how casually King regarded time. Though Georgia Powers does not appear in the film, Kamin’s book, and numerous others, report that she and one of her girlfriends were extended an invitation to this dinner party. So far, I have yet to read anyone rigorously engage the fact of Powers’s acceptance into the home of a minister and his wife as the guest of a married man as an affront to Mrs. King. As long as their coupling remained ostensibly discreet, King and Powers were free to disrespect, disregard, and dishonor Mrs. King at will. The one time Powers was prevented by someone in King’s circle from accompanying King was when Powers attempted to ride in the ambulance as King was taken to the hospital after being shot; Andrew Young is credited with interceding at this moment. Powers contends that she spent the rest of that tragic evening at Rev. Kyles’s house surrounded by the dinner prepared in King’s honor. The last time she would see King’s body was when she flew to Atlanta for the funeral where she offered her condolences to Mrs. King.

Overlooking the violence of adultery as an accepted component of a philosophy of nonviolence is an egregious omission. Though Mrs. King was not assassinated, she was routinely assaulted by most of the people who shared her world. It seems to me that the dynamics of nonviolence are inadequately engaged when the violence maintained against Mrs. King is so thoroughly dismissed; it’s amazing that she lived as long as she did given that so many people populating her world were trying to kill her. Nonviolence as both a tactic and a philosophy may have been an effective strategy for building a movement against white supremacy and disenfranchisement, but it certainly doesn’t seem to be an effective practice for black women who try to claim and maintain dignity and integrity for themselves within a marriage. This story, the story of the assault against Mrs. King, makes you question the possibilities of nonviolence as a model for building intimate relationships; it seems to work just fine for citizens and lovers, but nonviolence doesn’t appear to support a wife’s desire to experience the longevity that King longed for. Instead, as nonviolence may serve as an effective strategy for systemic change, at the same time, it expands the ways we can conceptualize domestic violence.