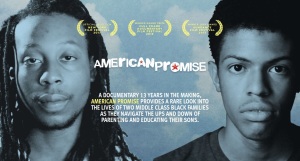 Now that I’ve stopped shaking my head, I can actually focus on the many problems with the documentary film American Promise–the title alone is problematic. What promises has this country ever fulfilled with respect to black Americans? Remember those 40 acres we were supposed to get? With the assassination of Abraham Lincoln, Sherman’s January 1865 promise of “40 acres” of former Confederate land to freed people was returned to white southerners after May 1865 in an effort to placate their defeat. Many black farmers were exploited as sharecroppers who leased land from white land owners who were then responsible for paying farmers through a share of the profits from the crops. Even for those black farmers who were able to work their own land and yield a profit, success was a dangerous affair. Hostile white famers were poised to take away land from black farmers and force them to work as sharecroppers. Black farmers could also be killed. That American promise didn’t pan out.

Remember that promissory note that Martin Luther King, jr. interpreted through civic promises made through the Declaration of Independence? Well, long before King describes his “dream” in his famous speech before the Lincoln memorial, he offered a stinging critique of America’s promise to all its citizens by describing the limitations of America’s promises as he saw them in 1963. “It is obvious today,” King notes, “that America has defaulted on this promissory note, insofar as her citizens of color are concerned. Instead of honoring this sacred obligation, America has given the Negro people a bad check, a check which has come back marked ‘insufficient funds.'” Historically speaking then, an American Promise holds as much possibility for fulfillment as a pipe dream.

So perhaps the parent filmmakers chose the title American Promise as the hope these young black boys reveal through their ability to thrive in a “rigorous, academic environment.” Both Idris and Seun appear to be very sweet young men, but I don’t have much faith in their ability to bring about social change; they’re too committed to the idea that another’s perspective has greater integrity than their own–and their parents support this faulty view. To that end, Idris’s parents allowed a secretary from The Dalton School to call their home to tell them that Idris was dropping ‘bows on his helpless, innocent classmate. Idris then offers his side of the story and reveals what this boy did to him and how he offers an equally childlike response, but instead of the school recognizing this interaction as childs-play, Idris received one day of suspension for assaulting his classmate and another day for lying about his behavior. Other than shake their heads, Idris’s parents failed to intervene on his behalf.

This combination of recognizing the racist aggression directed towards Idris, as well as Seun, and never confronting the authorities whose policies and procedures create the atmosphere of cruelty and violence against these children was deeply disturbing. If you already recognize that racism is routinely directed towards people of color, what is the point of using your child to prove what you already understand? Also problematic is the mechanism used to record the boys’ matriculation. Why would you use the same surveillance techniques used within a context of domination to monitor and thus curtail the freedom people of color might experience as a model for “documenting” your own child’s life?

I wasn’t impressed with The Dalton School or the claim the parents made about their children receiving a “good” education, at an “elite” school, that would enable their “success.” I did not hear these parents engage their children over a single intellectual question. Nearly everything the parents asked their children or discussed with their children was procedural in nature: “Why aren’t you more organized?” “How could you forget that book at school?” “When are you going to become more responsible?” “Why don’t you work harder? Hustle more?” These procedural things were the only questions posed to these children. I never heard a discussion about the books the students were assigned for school; and frankly, the in-class discussion about Tennessee Williams’s Streetcar Named Desire didn’t sound like the play I read. From their discussion, I barely even recognized it. Ralph Ellison’s Invisible Man at least captured what I recognized as aspects of the story, but then this discussion diminished the possibility for the narrative to act as a prism through which to examine multiple forms of inflicting violence.

Though Idris’s parents take great pride in having earned their undergraduate and graduate degrees from ivy league schools, the influence of these schools on how they prepare their son for developing an intellectual life is quite limited. To that end, even though they live in New York, the film doesn’t suggest that they ever attend plays, lectures on college campuses, visit the library, attend live musical performances or art exhibitions; too, while Idris expresses great interest in basketball, the film suggests that he doesn’t watch basketball games on television or that he has ever gone to college basketball games or professional ones. It’s not clear to me how people who value their own “elite” education, have not embraced the value of extending the boundaries of the classroom into other sites.

One of the most important lessons that I learned from this film is to beware the trap of “diversity.” Adding a few black, latino, and asian kids to the population allows a school to claim their investment in creating an inclusive learning environment. “Diversity” serves the institution not necessarily the students. Instead of “diversity,” I’m more interested in schools that are advocating for social change and that are invested in dismantling systems of domination. I’m sure such schools are hard to find, but locating such a place may not be necessary if you prepare your child to value inquiry and artful thinking. American Promise never suggests that developing an oppositional consciousness is meaningful, is aligned with “success,” connected to living a worthwhile life…and all I know to say about that is, “Lord have mercy.”