I often think about Toni Morrison’s interview with Anne Koenen in 1980 where Morrison reflects on a stunning conversation she has with a young girl:

When I talked to a very young black girl recently, it seemed to me that she had never heard of anything. They’re grown up like they never had grandmothers. Of if they had them, they never paid them any attention (p. 73 in Conversations with Toni Morrison).

I’ve had similar conversations with young people who dismiss their grandparents’ critique of racism in contemporary American culture. “My grandmother talks about the past like it’s still the 1950s, and I’m like, ‘grandma,’ things are not like that anymore,” they flippantly offer when recalling their grandmothers’ views. Their opinion suggests that their grandparents have grown old and their bodies bear its markings, but their analysis of race never left the Cold War era. If you recognize this description of a young person you know, here are a few examples of how much farther the country needs to advance in order to overcome its racial demons:

1. Neshoba: The Price of Freedom details the 1964 murder of three civil rights workers, James Chaney, Andrew Goodman, and Michael Schwerner in Mississippi. The unabashed hatred and venom that white supremacists offer as active expressions regarding the justifiable fate of these three young men may be startling to advocates of the nation’s post-racial status.

2. After viewing Neshoba: The Price of Freedom, turn the attention of young people in your life to contemporary Halloween costumes featuring American youths demonstrating their understanding of American history:

These Florida twenty-somethings actually staged the murder of a 17-year-old boy as comedy and not tragedy and were shameless enough to publicize their efforts. For more racist costumes, check out the Ebony magazine slideshow of 2013 (not 1913) lowlights. 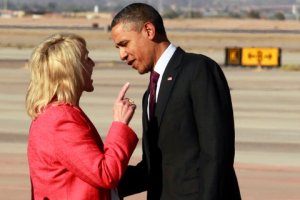 3. This ugly photograph of Arizona Governor Jan Brewer wagging her finger at President Obama and appearing to scold him like he’s a child prompted my thinking about other shameless, racist representations of the President and undignified interactions with his leadership.

There’s so much work to be done before “we shall overcome” becomes a fait accompli. If you engage with young people, encourage them to pay attention to their grandparents, what they have to say about racism might literally be lifesaving.