I finally had a chance to sit down and watch Free Angela and All Political Prisoners. I found it absorbing. Shola Lynch’s beautifully organized, thoughtful film offers an intriguing portrait of Angela Davis that sharply contrasts with the iconic Davis that all Americans presumably know. Knowledge based on her halo-like afro and her leather jacket have come to represent Davis’s total being through terms completely divorced from their political significance. Lynch’s documentary unpacks what Davis herself has critiqued as the reductionist symbolism of her appearance as a “politics of fashion,” through an engagement with how her self-presentation communicated a revolutionary “politics of liberation.” Davis’s embrace of anti-establishment ideas that critiqued capitalism, racism, and sexism infuriated those committed to the flourishing of a system of domination as an order that secured their wealth, power, and authority.

One of the reasons Lynch’s film succeeds is because Free Angela and All Political Prisoners manages to reveal a relationship between radical politics and oppositional consciousness to a profound sensitivity towards human suffering. The documentary casts Davis as deeply committed to a politics that could expose the humanity of those whose suffering derived from deliberately manipulated injustices. For Davis, prisons function as a site for highlighting gross efforts to dehumanize and then to exploit the vulnerability of people of color through a teleology that presumes their criminality. In contemporary terms, the brilliant writer Kiese Laymon describes this telos through one’s birth assignment, “being born a black boy on parole” is how he terms it. The achievements found in both Lynch’s documentary and Laymon’s writing stem from their ability to depict the emergence of an incisive, strident , radical critique through the efforts of quiet, reflective practices requiring deliberate and focused reading, patience, and attention.

In interviews that I’ve read with Davis regarding the film, she has been asked to comment on the similarities and differences between the 1960s and ’70s and contemporary culture. True to form, Davis is very generous in her evaluation of present youth activism. To my mind, Davis is an honest and brilliant woman so when she makes this claim, I can only assume that she’s thinking in global terms. Because if she’s speaking about American youth, I just don’t see it…but maybe I’m not looking in the right places.

Popular culture and social media are certainly not the places one should look for an oppositional consciousness. I thought about this recently as I watched Rihanna’s video for “Pour It Up.”

If you have not seen this video, I should caution you, before you decide to hit play, to hide your children first. Distract them with something, ANYTHING, for about 30 minutes so that you can view this 3:17 video in private and devote the remaining time to praying, crying, or shouting because you will need to do something to prepare yourself to answer the question, “what has become of freedom?”

While I identify myself as a feminist, and have done so for a very long time, I don’t see anything liberatory in glamorizing the lives and the choices of desperate women. When I have made this claim in discussions with young women, they are quick to denounce my views as being aligned with conservatives and elitists bent on “slut shaming” women for using their bodies however they please. Admittedly, I don’t understand how one can reasonably assert that someone might be “pleased” to perform such labor? Doesn’t a system of domination limit the choices of some women so that what they think of as available options contrasts sharply with women privileged enough to recognize, to claim, and to expect other options for supporting themselves? In a culture where great emphasis is placed on human worth being linked to expensive clothes, how would it be possible that this same culture extolls those whose work requires nudity? Routine, public nudity can’t possibly signify haute couture; though “Pour it Up” tries to make a strong case for it.

In recognizing the value of a feminist viewpoint, I understand that the music industry is the engine shielded by Rihanna’s explicit performance. And while I recognize its culpability, I don’t understand what it means for her to be rich. How does all this money, that her lyrics extoll, enable her freedom? It seems to me that if you have a lot of money, then your work wouldn’t require nudity; you could afford to be clothed in all that expensive shit that money can buy.  What the fuck is money for if it doesn’t free you from the choices that desperate women sometimes make? Rihanna, and this nasty ass video, represent, at least for me, the implausibility of American youth facilitating revolution: they’ve got a fucked up view of freedom. [Isn’t it interesting how we can see the ugliness in words and language but not in the cultural inscriptions on (black women’s) flesh?]

Young Americans appear to have no investment in freedom and its role in facilitating a person’s ability to lead lives of dignity and integrity. It’s as though those words have no currency anymore; no value. In Free Angela and All Political Prisoners, freedom, dignity, and integrity were used repeatedly to articulate the meaning of injustice; indecency had meaning. How might activism proceed in a culture wherein indecency may be substituted for glamour? It’s an intensification of the problem Angela Davis identifies in substituting a “politics of liberation for a politics of fashion.” Our current enchantment with indecency not only obscures, but strangles the possibility for the emergence of “other models by which to live,” which interestingly enough, essentially constitutes a review of the ambitions of generations of activists who fought for the righteousness of decency. Angela Davis is still with us and she is still advocating for a world where every person can live with what Martin Luther King, Jr envisioned as one where every [person] respects “the dignity and worth of human personality.” I just don’t see how the ostensible razzle-dazzle of stripping gets us to a better place.

More and more, I’m beginning to see the political significance of beauty; the weight of beauty that Ben Arogundade understands as a “human rights issue.” In order for freedom, dignity, and integrity to matter, for Davis and King to be intelligible, you’ve got to be able to see the ugliness of “Pour it Up.” In order for that to happen, the social critique facilitated by the quiet, diligence, patience, and literacy that Davis values would have to triumph over the speed with which one can upload a new “selfie;” do more than view provocative discussion through the lens of “hot topics;” and value clear, concrete, expression over allowing the claim of “feeling some type of way” about an issue to hold meaning. I wish I could see what Angela Davis sees in young people, but the fact that I don’t helps me see and truly understand what it means to be visionary.

According to on article on the Huffington Post, Gloria Steinem has no criticism that would “shame” Miley Cyrus given her infamous 2013 VMA performance and acknowledges “the complex context of Cyrus’s manufactured sexuality.” In response to a question about whether or not Cyrus’s performance negatively impacted feminism, Steinhem reportedly made these remarks:

I wish we didn’t have to be nude to be noticed … But given the game as it exists, women make decisions. For instance, the Miss America contest is in all of its states … the single greatest source of scholarship money for women in the United States. If a contest based only on appearance was the single greatest source of scholarship money for men, we would be saying, “This is why China wins.” You know? It’s ridiculous. But that’s the way the culture is. I think that we need to change the culture, not blame the people that are playing the only game that exists.

It’s not clear to me how we’re supposed to change a culture through complicity. And what kind of feminism uses men as a standard for how we imagine liberation? Also problematic is Steinem’s claim that women “have to be nude to be noticed.” What kind of attention is she describing? I’ve never seen Miley Cyrus in a single episode of Hanna Montana but one of the reasons why her VMA performance was so scandalous is because she achieved contemporary stardom playing the role of a wholesome, all-American girl through the character on that television show. Cyrus wasn’t nude on that show and she was “noticed.” In fact, she’s still “noticed.” People are actually discussing this girl’s performance, but what about the “choices” of poor, black, anonymous girls? Does refusing to “shame” Cyrus mean that we create an acceptable space for the ostensible virtue of stripping? Cyrus’s “decision” to participate in the mainstreaming of stripping is shameful precisely because it mocks the violent ecology informing the “decisions” that desperate women make. Miley Cyrus isn’t a good example to use in attempting to critique a culture for subjugating women; unless the point is to underscore women’s complicity in patriarchy. Steinhem doesn’t appear to be making such a critique. Instead, Steinhem wants to emphasize the culture’s role in influencing Cyrus’s choice so as not to focus on an evaluation of her “decision.” Miley Cyrus’s “decision” to sexually objectify herself, like Rihanna’s, is a poor decision…and just a hot ass mess.

Lorna Simpson offers an alternative response to cultural dismissal that is far more compelling and potentially transformative than anything suggested in the parodies of desperation exhibited in the videos and stage performances of contemporary pop stars. In “Waterbearer,” Simpson constructs the portrait of a woman who claims the integrity of her own witness despite her dismissal: 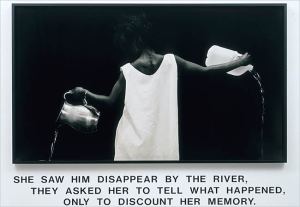 Like a vernacular Lady Justice, Simpson’s Waterbearer exposes the prejudices of the law. Rather than beg for attention and acknowledgement of her authority, she continues on with her work of weighing and measuring injustice.