In the introduction to her book Posing Beauty: African American Images from the 1890s to the Present, Deborah Willis cites Ben Arogundade who provocatively frames the subject of the moral and political implications of beauty:

“in literary terms, black beauty remains a cause without a portfolio…Who can really talk of the folly of beauty when there are still so many other battles to be won? But beauty is also a battle. And the right to be beautiful and to be acknowledged as such whoever you are, wherever you are from is not so much a folly as a human-rights issue. In writing the history of the black experience did we forget something important? Did we forget about beauty?”

In the first post I ever wrote about the slaying of Trayvon Martin, I made a discussion of beauty a central element in my reflection. As the case against Zimmerman continued to mount, challenges emerged against the original images that were introduced to compel interest in seeking an indictment against the shooter. Thus, the photos of Martin smiling sweetly

were countered with photographs suggesting that the “real” Trayvon Martin was a thug. Photographs of Martin sporting a grill 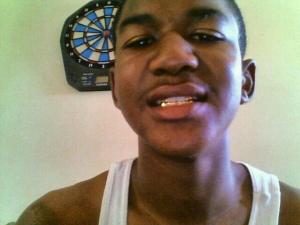 were offered as evidence that he was your typical ugly,black, low-life gangsta menacing and threatening the safety of innocent people. As far as I was concerned, the publishing of those “thug life” images of Martin ensured that the prosecution was not going to secure a guilty verdict against Zimmerman. The logic undergirding my claim regarding the verdict stems from my familiarity with the significance of Mrs. Rosa Parks’s refusal to give up her seat to a white man on December 1, 1955 in Montgomery. As Martin Luther King, Jr. would say about Parks, she was “not a disturbing factor,” this perception enabled activists to strategically cast her as a quiet, demure, simple woman whose character was beyond reproach. In other words, nothing in her record or her reputation could be used to undermine claims regarding her dignity and integrity. The “thug life” images of Trayvon Martin did just that. Those photographs denied the possibility of Martin’s innocence.

Beautiful black boys do not exist as plausible characters in the national narrative of U.S. civil society. I’m sure that folk won’t like my claim, but I would love to have someone counter me. I would be most interested in the evidence you would offer to support your claim that America values black boys; thinks they are beautiful; lovable.  What data would you use? You couldn’t cite data culled from the Department of Education or from Criminal Justice sources; you couldn’t point to housing, employment, or medical records. You could claim that President Obama’s elections prove that Americans now reside in a post-racial society. Now I am no Nate Silver but I doubt that even he could use one number or even two to show evidence of anything or to make a meaningful prediction. Obama’s election victories were cultural surprises not reasonable assumptions. Thus, Obama’s presidency does not prove a change in racial attitudes as much as it is an interesting abnormality in an otherwise predictably racist society.

The verdict in Zimmerman’s trial calls attention to the consequences of ugliness. Ugly people are disposable and outside of calls for justice. Thus, wedding ugliness to blackness as shown in the Zimmerman trial reveals the truth of Willis and Arogundade’s assertion that beauty is a “human-rights issue.” There is no cost, no penalty for exterminating ugliness.

If you have a black son, black daughter, black neighbor, black mother, black father, black friend or know anyone who cares about black people, know this: James Baldwin was right when in 1963 he told his nephew that he was “born into a society which spelled out with brutal clarity, and in as many ways as possible, that [he was] a worthless human being.” In light of this truth, loving black people, parenting black people, teaching black people requires that you create an awareness of the callous regard awaiting them and that you help them in developing strategies of disavowal. To that end, direct them to the charge that Toni Morrison offers through the character Baby Suggs as she preaches to those black people who come to hear her in the Clearing:

“Here,” she said, “in this here place, we flesh; flesh that weeps, laughs; flesh that dances on bare feet in grass. Love it. Love it hard. Yonder they do not love your flesh. They despise it. They don’t love your eyes; they just as soon pick em out. No more do they love the skin on your back. Yonder they flay it. And O my people they do not love your hands. Those they only use, tie, bind, chop off and leave empty. Love your hands! Love them. Raise them up and kiss them. Touch others with them, pat them together, stroke them on your face ’cause they don’t love that either. You got to love it, you! And no, they ain’t in love with your mouth. Yonder, out there, they will see it broken and break it again. What you say out of it they will not heed. What you scream from it they do not hear. What you put into it to nourish your body they will snatch away and give you leavens instead. No, they don’t love your mouth. You got to love it. This is flesh I’m talking about here. Flesh that needs to be loved. Feet that need to rest and to dance; backs that need support; shoulders that need arms, strong arms I’m telling you. And O my people, out yonder, hear me, they do not love your neck unnoosed and straight. So love your neck; put a hand on it, grace it, stroke it and hold it up. And all your inside parts that they’d just as soon slop for hogs, you got to love them. The dark, dark liver–love it, love it, and the beat and beating heart, love that too. More than eyes or feet. More than lungs that have yet to draw free air. More than your life holding womb and you life-giving private parts, hear me now, love your heart. For this is the prize.”

Thus, the work of loving black folk requires creating a “Here” in some Clearing, some safe space where they can be extolled. Delighting in the worthiness of blackness serves as an act of reclamation from the unmerciful clutches of racism. As I’ve written before, the one positive thing that I can take away from the tragedy of Trayvon Martin’s brutal slaying is that he fought for his life; he thought his life was valuable. That means his parents can join the pantheon of black parents who created a space for their sons and daughters to know of their significance despite American culture’s claims to the contrary. American society’s failure to thoroughly appreciate black beauty and dignity has lethal consequences. If black love continues to mean teaching black children to think that their lives have significance, they might continue fighting back like Trayvon Martin did. And it is my hope that in continuing to fight, one day, those children will win.

2 thoughts on “Beauty, Human Rights, and the Zimmerman Verdict”