I think it’s generally pretty true that when I typically read about African American life from the time between 1952 and 1968, I read about it through the lens of black American life. I certainly thought that I had a firm understanding of the character and the courage of those folk, particularly black southerners, in the midst of segregation. I am currently reading Dan Carter’s book, The Politics of Rage: George Wallace, The Origins of the New Conservatism, and the Transformation of American Politics, and it has made me rethink what I took to be my firm grip on the dignity and integrity of black southern life. Now when I think about the routine risks of living while black in the midst of segregation, I feel that I have neglected my responsibilities as a mature and conscientious person in not genuflecting before any black American who came of age during the height of Jim Crow.

Before reading this book, I was interested in George Wallace because he was the governor of Alabama at what I take to be an interesting and important moment in the nation’s history of race relations. Even more to the point of my own interests, Wallace was the governor when the Klansmen bombed the Sixteenth Street Baptist Church on September 15, 1963. 1963, the centennial year of the Emancipation Proclamation, Martin Luther King, Jr.’s famous “I Have a Dream” speech as well as the “Letter from Birmingham Jail,” is also the same year when Wallace offers his infamous inaugural address where he

proclaims “segregation now, segregation tomorrow, and segregation forever.” 1963 was also the year when governor Wallace made his notorious stand in the schoolhouse door in an attempt to prevent the

integration of The University of Alabama. In reading Carter’s book, Wallace has expanded from a person shamefully recognizable because of these dishonorable moments to someone I view as thoroughly reprehensible. There are moments when reading The Politics of Rage that I have to take a break because I really just don’t have the stomach for the ugliness and brutality reflected in nearly every aspect of Wallace’s life.

Birmingham Public Safety Commissioner Eugene “Bull” Connor usually gets credit for being the force influencing the viciousness of Birmingham authority against black citizens; rightfully so. This is the man responsible for turning angry dogs and powerful fire hoses against the tender flesh of children, some as young as six-years-old. 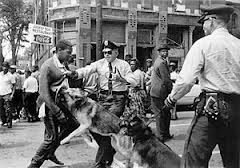 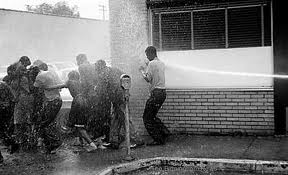 What Carter makes clear is that governor Wallace was the person responsible for putting people in place who would relentlessly and unmercifully enforce white supremacy. I now have a much better sense of how thoroughly blackness was held in contempt and how far people were willing to go in reifying this idea. For instance, I was appalled by how quickly Wallace was able to shift the focus of many white southerners from mourning over the death of Addie Mae Collins, Denise McNair, Carole Robertson, and Cynthia Wesley to an emphasis on the politics of race and fear. Though Wallace would allow that the explosion disturbed him, he went on to suggest that Communists or black Americans planned the explosion in order to gain publicity for their causes.

George Wallace had seemingly looked out upon those white Americans north of Alabama and suddenly been awakened by a blinding vision: ”They all hate black people, all of them. They’re all afraid, all of them. Great God! That’s it! They’re all Southern! The whole United States is Southern!’ (344)

According to Carter, “every survey of [Wallace’s] followers showed that one of the major sources of his national appeal lay in the perception that he was antiblack” (344). These views reminded me of James Baldwin’s words to his nephew in The Fire Next Time, also published in 1963: “you were born into a society which spelled out with brutal clarity, and in as many ways as possible, that you were a worthless human being” (7).

I’m not finished with Carter’s book yet. I’m only at the part where Wallace makes a bid for the presidency in 1968, so I’m far from the time when he gets reelected as governor of Alabama with support from Black southerners! How does that actually happen? In the video above, Vivian Malone, the first black American to graduate from The University of Alabama, suggests some of what I will learn as she confesses to her own sympathies for Wallace in his final days. It’s the kind of sympathy that I can only find myself wanting to genuflect before.