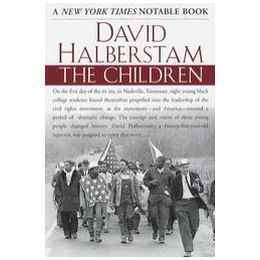 My father was the one who first told me that David Halberstam was killed in a car accident. I don’t remember what we were talking about or which of Halberstam’s books I was reading at the time but when I referenced him, I clearly remember my father asking, “oh, the guy who died the other day?” “Really,” I asked. “Yeah,” he said, “I’m pretty sure he was killed in a car crash.” I searched for the story immediately after getting off the phone with my father and he had been correct. I remember being incredibly saddened by that news as well as struck by how diligently my father read. It was a habit he was very proud of.

As I’ve been reading Halberstam’s The Children I’ve been thinking a lot of my father, not so much because of the subject matter, but because he seems to fit with my impressions of Halberstam now. I think of them together, and this is a beautiful work to regard them over. If you are someone who takes an interest in considering portraits of peoples’ inner-lives and imagining the content of quiet, internal narratives that convey or lead to original ways of living in the world, then this book offers much to enjoy.

I’m far from finished but one of my favorite stories to consider thus far has been about James Lawson’s mother, Philane. Mrs. Lawson was born in Jamaica as Philane Cover. She married James Lawson, Sr. and together they created a large family of nine children. Though James Sr. was the minister, it was Philane who impressed her oldest son Jim with a deep and lasting impression of nonviolence. Halberstam writes beautifully and movingly of the impression Philane made on young Lawson:

Her love, her optimism about human nature, and her belief that there had to be a better way than responding to hatred with hatred of your own–a hatred which she feared might end up devouring the hater–formed his home every bit as much, he later decided, as did his father’s strength and hard work. She was a strong, careful, loving woman who knew how to maximize the limited amount of money a black minster in the North made in the thirties and forties. They got their home from the church, and there was a church salary, probably no more than $1,000 a year. The black women of that generation, he believed, were brilliant at many things, none less than making-do, raising families virtually outside the cash economy. On a tiny salary Jim Lawson’s parents raised their nine children, sent five to college in an austere American economy, and did it so well that no one ever felt poor. Philane was a skilled cook, a magical repackager of food, so that nothing was ever wasted. She was a talented seamstress. By ritual every December each Lawson child was allowed one new suit of clothes for Christmas […]

They grew a lot of their own food, and they always seemed to eat well. They had a big backyard and that allowed them not only to grow vegetables, but to keep chickens as well. It was a family where everyone shared in the chores and everyone accepted responsibility for getting the work done […]

Jim’s mother, in addition to her other household chores, worked regularly in her home doing alterations for a local dress shop, and there were frequent offers for her to come and work full-time in the downtown store. It was only when the youngest children were in high school that she took such a job. Even in the late fifties, with her family largely grown and her holding the full-time job, she still ran a wonderful home. The first time Dorothy Wood came to Massillon to meet her husband’s family, the thing she remembered both then and every other time she visited was that on Saturday, at 4:00 a.m., the wonderful smell of baking bread would fill the house because Philane Lawson had gotten up early and started cooking so that her family would have the best of homemade foods all weekend, full-time downtown job or no. She was, her daughter-in-law decided, a woman full of human richness and a woman who took her own codes seriously […]

As Jim Lawson came to manhood he had a sense of how hard his mother’s life had been. It had been difficult for her as a girl–a life with little opportunity–but she had set out to create against all odds a better life; she had come to this country on her own and married and raised a large and loving family. Most important, she had managed to pass on not merely strength but compassion and a capacity to love to all of her children. She had strengthened them without hardening them. That, her son thought, was truly miraculous.

Halberstam’s understanding of Dorothy Wood’s impressions of her mother-in-law as someone “full of human richness” strikes at the very core of the meaningful portrait he paints of Philane Lawson. Wealth here gets defined through the human ability to generate and extend a capacity for regarding another with careful acknowledgement and concern. The ability to generate such wealth is astonishing in light of the fact that the world of Jim Crow segregation with its thorough contempt of blackness, which permeated all of America, North and South, would have defined riches against a black person’s ability to have it. The America of Philane Lawson’s time forced black people into the most menial jobs and thus the lowest economic positions and housing options that it could fashion. It was a nation that left black people to enter the most ill-equipped schools and to be cared for in the most neglected corners and basements of medical facilities. It was a country that used its creativity, its energy, its laws and its customs to showcase its disdain for black people, and this is no exaggeration.

Even as the country began making strides towards integration, it was clear that it knew very little of what it meant to be hospitable towards black people. Halberstam offers an example of the limits of hospitality as the nation considered integration after the Brown v. Board of Education decision of 1954 as it appeared at Vanderbilt University. He writes:

When Vanderbilt had made its first tentative steps toward integration in its law, divinity, and graduate schools, there had been built-in restrictions. The black students were not to dine in the student cafeteria, they were not to play intramural athletics, they were not to buy tickets that allowed them to sit in the Vanderbilt gym for athletic games, and they were most assuredly not to live in an otherwise white dorm. If at all possible, they were not to use the toilets, which had been white-only until then. Nor were they, if the administration had any choice in the matter, to feel particularly welcome. In 1959 one of the school’s deans had received a letter of application from a would-be black Ph.D. candidate. The dean wrote back to warn the young man of the “annoying, embarrassing, or very distasteful” experiences he would probably face as a Vanderbilt graduate student. He would not be able to live on campus, so he would have to find housing in a black residential area. He would, the dean warned, be refused service in restaurants and motels, and he would run into other forms of rejection at the hands of white Nashvillians. Otherwise, it was presumed, he would be quite welcome to come.

This is so absurd it’s hard to even know where to begin. In effect, black students could come to Vanderbilt but they would be made to feel like they did not belong there. Too, black students should accept this treatment as a part of their admission and they were to adjust their emotional lives so as to feel suitably pained by their treatment. It was not enough to be treated poorly, black students needed to actually feel unwelcome, which of course, wouldn’t have been much of a stretch since they actually were unwelcome.

If the disdain for blackness represented in the Vanderbilt dean’s letter was supposed to extend to black spaces, Philane Lawson’s work for her family suggests definite limits to how far Jim Crow was allowed to permeate black life. Philane Lawson’s actions towards her family suggests that she had not used the broader culture as a model for determining the quality of the experiences her family should enjoy. That Mrs. Lawson could value herself and the people that the nation had decided were unworthy of anything it regarded as valuable was an achievement. Mrs. Lawson defined her humanity as wealth. She disagreed with the nation’s contempt for blackness and so she baked bread for her family at 4 a.m. on Saturday; she re-imagined how her family’s food would be served; she planned and saved for how her family would be clothed. Her example offers a model of wealth in human terms.