Maybe Mitch Duneier’s description of Bart’s death and its aftermath has influenced my current interest in the Beatles’ song “Eleanor Rigby.”

Bart dies alone and stays in the morgue for three weeks. Duneier makes the point that Bart wasn’t completely removed from belonging to community because the men at Valois mourned him. In fact, they were the ones who first detected that something was wrong and then alerted his brother who refused to act on this knowledge. So for Duneier, Bart was no Eleanor Rigby. 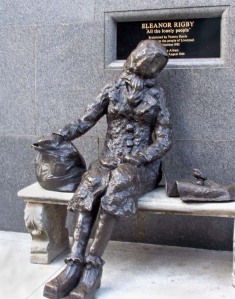 No one knows her or cares enough about her to even call a brother who will not answer.

The Beatles’ song asks us to consider where lonely people belong. There are lots of stories that could be told in answer to that question, and I think that some of those stories need to involve people who should be excluded from belonging. I was reading an advice column where a woman said that her uncle molested her when she was a child. Now that he is old and she’s the only family member who can take care of him, she’s concerned about her obligations to him. The advice was to honor her knowledge of her uncle’s abuse and let him find alternative care. I agreed with this advice: Some people are outside of community for good reason…Jerry Sandusky should be one of those people.

Sandusky’s crimes against boys while he was a coach at Penn State should bar him from community. His perversion does not fit him for the benefit of participating in civil society. I was saddened to learn that lawyers representing the victims have speculated about possible feelings of betrayal from the victims because the Board of Trustees fired Joe Paterno, the head coach at Penn State. The belief is that the students rioting in protest of Paterno’s forced departure would bear upon the victims. I hope that someone convinces them that the Board’s decision was a good one. Paterno had not done enough to stop this abuse in his team’s name. He should have had Sandusky barred from Penn State football facilities when he learned of his actions and provided reasons for his decision to the public. The students at Penn State are engaged in a dishonorable protest.

Mike McQueary, the wide receivers coach, had been a graduate assistant when he witnessed Sandusky abusing a boy in a locker room shower. He made his witness meaningful when he told his father who then encouraged him to tell Coach Paterno. Paterno then told the Athletic Director and that’s where the reporting meaningfully ends; it all remains internal and no one calls the police. McQueary had been tapped to take over as head coach during Saturday’s game against Nebraska but due to death threats against him, the Board has decided it’s best for him to not coach.

It’s not clear whether the death threats McQueary has received are due to his failure to personally interrupt Sandusky or if they are a result of him being seen as a whistleblower and thus Paterno’s betrayer…it’s all so violent. I do have sympathy for the humanity of McQueary’s failing, if that’s even the right word. He didn’t show the heroism that we might have wanted; the heroism of Hollywood that would have shown him stopping the coach, his supervisor and much older man, from committing a horrifying act. Life though, doesn’t always unfold just so. I see McQueary as horrified and powerless in his initial encounter. His initial weakness gets redeemed though because he told someone. I see his actions as admitting a truth about our abilities as human beings: sometimes our best, in the worst moments, isn’t quite good enough.

My father would have been saddened to learn of the abuse these boys endured. He would have had no problem with the Board of Trustees firing Paterno, and he would have wanted to see Jerry Sandusky become a very lonely man.

One thought on “Reading with my Father: Slim’s Table Interlude (on Penn State)”