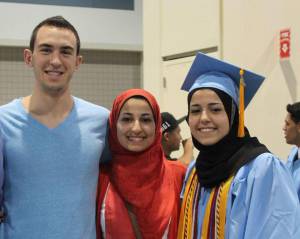 By now, you may have heard of the Chapel Hill shooting of newlyweds Deah Barakat, Yusor Mohammad Abu-Salhar and her sister Razan Mohammad Abu-Salhar. Say these names aloud. I won’t detail the event which ended their lives brutally short here. Though underreported, the information is out there.

Islamophobia has many faces. We saw it when millions marched under the banner of “Je suis Charlie” proclaiming support for freedom of speech – in reality, affirming the power of a viciously Islamophobic publication. We see it again now in the three young, promising Muslim lives taken by a white supremacist, a violent anti-theist, on Tuesday.

I refer to the events surrounding Charlie Hebdo because there are more than a few parallels. For one, it is publications like Charlie Hebdo that contribute to the very rhetoric which bred the Chapel Hill shooting. “Freedom of speech” is used to disguise…

One thought on “Western Apologies”