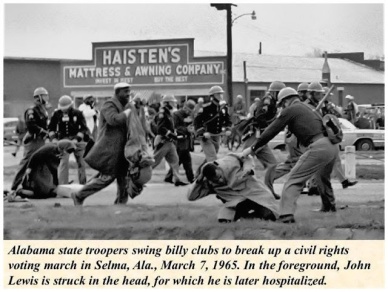 Jennifer Schuessler, a movie reviewer for The New York Times, might consider reading Janet Maslin’s review of Ravi Howard’s latest novel, Driving the King, for its effectiveness in offering a close reading with keen understanding of the subject matter. Schuessler’s review of Selma addresses the grievances of some historians and those who worked closely with former President Lyndon Baines Johnson (LBJ), but she does so without even a hint of critical consciousness regarding the racist and racialized complaints concerning the film. For example, in response to the “adversarial” portrayal of King and LBJ’s relationship, one of the filmmaker’s consultants, historian Gary May, affirms the expected ire in response to the film, noting:

“Here you have the first film about King, and some people are coming in and saying, ‘The story is really about the white people,’ he said. In historical truth, the story was really about everybody.”

Professor May’s acute assessment of the limited spectatorship of American audiences rings true. Basically, if it (whatever “it” is) is not about the goodness of white people, something’s wrong with the story. May further asserts his contention that “the story was really about everybody.” What exactly does this mean? Bloody Sunday resulted from legally sanctioned discrimination and segregation violently endorsed by local and national government against black Americans and their right to vote.To say that Bloody Sunday was a “story about everybody” romanticizes the violence specifically directed towards black Americans, not “everybody.” An even more jaw dropping revelation from May comes at the moment when he offers his analysis of DuVernay’s portrayal of LBJ: “On balance, the film is a positive force,” he said. But in the Johnson scenes, he said, “there is a problem with tone.”

It’s not clear to me exactly what Professor May means by “tone” because of his imprecision, or the editor’s decision, to cut his explication short. In my estimation, his criticism of the filmmaker’s tone suggests that DuVernay’s portrayal of Johnson is that of an angry black woman who paints an unflattering portrait of a white man that might make white people uncomfortable. May doesn’t even recognize his own insight about the problem with criticism of a film about King (which it is not; it is a film about the everyday people who were the foot soldiers of the modern civil rights movement) into a story “really about white people.”

I wish The New York Times would have revealed the civil rights historians who “agreed with the broader point that Johnson and Dr. King were partners, not adversaries.” Whoever these civil rights historians are need to stop calling themselves “historians” and start calling themselves “romance writers of historical fiction.” How could ANY expert trained in American history assert that a partnership existed between the United States government, via the President, and black Americans in a quest to dismantle what black feminist scholar bell hooks calls, “white supremacist capitalist patriarchy?” Claiming such an alliance appears more like a piece of science-fiction than the facts of U.S. history…and please don’t tell me what former President Bill Clinton did for Black Americans. On an individual basis, Clinton dispatched the many black people in governmental posts with transformative ideas. Don’t believe me?  Just ask legal scholar Lani Guinier and Surgeon General Joycelyn Elders how progressive Clinton was. Despite being granted an opportunity to fight for and support individuals with strong opinions, transgressive ideas he did what was best for the maintenance of his own authority. The same holds true in legal matters. For example, Clinton’s 1996 Crime Bill harshly impacted blighted communities populated by the most marginalized citizens (i.e. people of color-men and women, the poor). It might be my limited imagination, but I can’t imagine any black man in his right mind–especially during a period when domestic terrorism reigned–EVER considering himself in partnership with a white man who just happened to be the President of the United States!

In 1965, King and Johnson were similarly interested in Johnson’s Great Society programs. King was himself eager to have the Voting Rights Act pass, but Johnson thought more time was needed to gain support from members of Congress; our “partners” disagree (to this end, even King was late to the party: SNCC initiated the persistent push for voting rights in Alabama before King meets with Johnson in 1964). Before our “partners” disagreed on King’s criticism of Vietnam, King called out the federal government (which would have the President of the United States as its most prominent representative) for its “timidity,” which he found to be in complicity with lethal violence in Selma; like the state police officers’ bullets that killed Jimmie Lee Jackson (on February 26-the date of Trayvon Martin’s death decades later). While Schuessler’s review offers historian David Garrow’s opinion that “Selma was not Johnson’s idea,” he also contends that [Johnson] was happy that King was out there mounting a voting rights act,” there’s no acknowledgement that historian Clayborne Carson offers an altogether different perspective:

“Dismayed that the demonstrations in Alabama were forcing his hand, Johnson tried in vain to persuade King to defuse the situation. When the two men met briefly on Feb.9, he privately confided to King that he now accepted the need for new legislation. King remained convinced, however, that protests should continue in Alabama to maintain pressure on the president.

“The relationship between the two men was superficially cordial, but was also strained by growing differences over American military escalation in Vietnam and by their mutual realization that the FBI was maintaining close surveillance of King.”

Furthermore, Carson and Garrow disagree with a number of the unnamed historians who take issue with “Johnson’s attitude toward F.B.I. surveillance of Dr. King’s personal life.” Like Garrow, I have not seen the film (it hasn’t opened in my city) but I do take issue with Garrow’s narrow interpretation of the possible connection the film makes between LBJ and the salacious F.B.I. tapes of King ostensibly caught in the act of committing adultery. Garrow contends, “If the movie suggests LBJ had anything to do with the tape, that’s truly vile and a real historical crime against LBJ.” Garrow’s harsh accusation against this film’s suggestion that LBJ was linked to the tape that Mrs. King described as being indecipherable suggests the scholar’s attenuated reading of complicity with the Kennedy administration and LBJ’s own moral laxity in allowing Hoover to send letters to King threatening to expose his adulterous behavior and urging him to commit suicide. According to Clayborne Carson, King received this material “[o]n the eve of the Selma campaign.” Professor Julian E. Zelizer claims that the film commits the “historical crime” that Garrow notes because it “obviously wanted to create a villain.” I haven’t yet read Zelizer’s book about LBJ but I’m not eager to do so in light of the laughable assertion that one would need to “create a villain” in Jim Crow America.

Reading Maslin’s book review of Ravi Howard’s Driving the King may have helped Schuessler reporting because she understands how art often reconstructs the facts of actual events in an effort to highlight the high stakes of history. As Maslin writes in an insightful caution to readers, “no one should read this warmly enveloping book looking for authentic history […] Mr. Howard wants to incorporate the courage shown by many others in Montgomery into this book, so he significantly altered Mr. Cole’s real story.” According to Maslin, Howard makes the artistic choice to “distort” the facts of Cole’s life because ultimately, the novel “wants to incorporate the courage shown by many others in Montgomery […]” Might Ms. DuVernay have chosen a similar device? Maslin recognizes that artists have an opportunity to imagine scenarios that might lack documentation (if in fact Ms. DuVernay’s representation does). New York Times critic A.O. Scott also recognizes that filmmaking is an art. In his review of Selma he clearly notes cinematic techniques used in powerful storytelling:

Packed with incident and overflowing with fascinating characters, [Selma] is a triumph of efficient, emphatic cinematic storytelling. And much more than that of course: It would be hard to imagine a timelier, more necessary popular entertainment in the year of Ferguson, Mo., a reminder both of progress made and promises unkept. But such relevance is hardly automatic. A timid, pious or dishonest movie about the time–burnished glories of the civil rights era–the kind of soothing fable of awakened white conscience that Hollywood has too often favored–would not do anyone any good.

Rather than an angry black woman or someone who has committed a “truly vile and real historical crime against LBJ,” Scott acknowledges DuVernay’s mastery of craft and thus her ability to push through the “sentimental bosh” of Hollywood to expose the ugliness and brutality of the ongoing narrative of racial terrorism in the United States…and the artifacts available for all to see: