When 29 year-old Police Officer Daniel Pantaleo used a banned chokehold maneuver that would kill Eric Garner, it was all good ’cause the Officer perceived himself as using a “wrestling move.” Officer Pantaleo didn’t “mean” to kill Garner, he was just trying to arrest the man for the horrendous crime of selling individual cigarettes. As my son would say, “it was just an accident–it’s o.k.” In other words, Sh$t happens. Oops. My bad. Officer Pantaleo admitted that Mr. Garner told him that he “couldn’t breathe,” but Pantaleo’s lawyer had his back! Stuart London—lawyer/wrestling manager/hype-man–argued that the coroner’s conclusion that the chokehold and the compression to Mr. Garner’s chest caused his death was wrong because in saying he could not breathe, Mr. Garner had to be breathing; and it worked! The grand jury bought it. Who were these jurists? How could those people not reason that Mr. Garner was saying he could not breathe until he was not breathing? It’s like when an officer gets shot and says, “I’m hit! I’m hit!” The officer most certainly is alive when uttering those words, but if the bullets cause irreparable damage and the officer stops breathing, then (s)he is dead and whoever shot the officer would be charged with murder. Unlike a bullet, Officer Panteleo and his boys could’ve lightened-up on the man when he told them they were suffocating him, but Mr. Garner was still talking so they just kept at it. If the point wasn’t to kill Mr. Garner, why didn’t they just stop? I’m no medical doctor but I can reason that a suffocating man would be pretty easy to arrest at that point.

Officer Panteleo’s storyline borrows a script straight from the Hulk Hogan, Macho Man Randy Savage age when he claims that he didn’t immediately release Mr. Garner because he was protecting him. You see, he didn’t want “both he and Garner [to] go through that glass.” Still concerned for Mr. Garner’s well-being, Officer Pantaleo not only held on to maintain his balance, but also because, “he wanted to make sure that Mr. Garner was not injured by other officers rushing in, as well as to prevent Mr. Garner from possibly biting one of them.” Officer Panteleo was trying to make sure that everyone remained unharmed! I mean, if the unarmed, suffocating man who posed a considerable threat to the community due to his illegal cigarette selling was to be released from the officer’s grip, who knows what would’ve happened…

I want to tell the kid hugging the cop in this viral photograph, “stay away from cops passing out hugs.” If this child doesn’t heed some sorta caution, as he gets older, those hugs from cops become a little bit firmer…if he actually becomes a black man, this same cop will hug him to death. 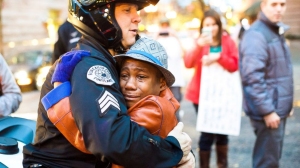 Malcolm X once used the figure of chocking to make a point concerning white supremacist violence and injustice: