Yes, I know how Kentucky is spelled on a map but this spelling references a Frank X Walker poem in the book Affrilachia, a work I highly recommend. In my reading, the altered spelling references the difference black folk make to the state even though written out of the history and representation of the region; particularly, Appalachia. Walker coined the term Affrilachia after consulting a dictionary and learning that the term Appalachian specifically referenced white residents of the Appalachian region.

While I lived in Lexington I was underwhelmed by the experience of African American history; not so since I left. My son’s birth brought Kentucke history into greater relief as I set out to mark our family’s history in the state. My grandparents were born in Louisville in the 1920s. I was raised in my grandparent’s home surrounded by gorgeous pictures of their past. This is a photograph of my grandmother and her parents:

My grandmother’s birth mother, pictured here, died of a rare brain tumor shortly after this photograph was taken. My great-grandfather would later marry a wonderful woman who my grandmother would come to call “Ma Ma.”

My grandmother and grandfather met while students at Catholic Colored High. I recently obtained a copy of my grandfather’s report card from his years there: 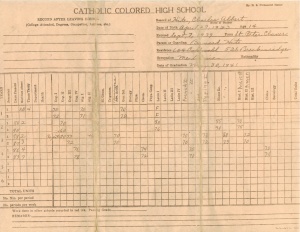 Though my grandfather wasn’t the greatest student, I thought he was a thoughtful man. I wanted to be just like him; think like him; value silence. My grandmother performed much better in school. She was sixteen when she graduated:

My grandfather served in World War II and he and my grandmother exchanged photographs while he was stationed in the Pacific: 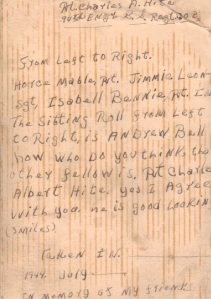 When he returned from the war, he and my grandmother would pose for a picture that would become a family classic:

Everyone in my immediately family loves this photograph and they used to fight over who should own it. My Aunt Sharon used to own the only copy we knew to exist but we recently learned that my Aunt Shirley, my grandmother’s sister, owned a copy.

When I grew-up, photographs like these covered our basement walls. One of the reasons why I think bell hooks’s “In Our Glory” is one of the top ten essays ever written is because it helps me understood why these images were so important. hooks writes:

Most Southern black folks grew up in a context where snapshots and the more stylized photographs taken by professional photographers were the easiest images to produce. Displaying these images in everyday life was as central as making them. The walls of images in Southern black homes were sites of resistance. They constituted private, black-owned and operated gallery space where images could be displayed, shown to friends and strangers. These walls were a space where, in the midst of segregation, the hardship of apartheid, dehumanization could be countered. Images could be critically considered, subjects positioned according to individual desire.

It took me a while to realize it, but my family’s walls were the first place for making Kentucke an important site for considering, observing, and appreciating black history.